A bluff in poker is when you make a bet or raise in an attempt to make your opponent(s) fold a better hand than you, helping award you the pot by default in the process. While players have the ability to make a bluff at any time during a game, the best players always bluff at the most opportune times – in other words, when they think their opponent(s) will fold the most often.

Knowing when to bluff calls upon a specific, learnable bluffing skillset that will help players maximize their expected value (EV) and profit the most through bluffing. The aim of this dense guide is to properly arm you with all of the knowledge required in order to master this art form of bluffing!

THE THEORY OF THE POKER BLUFF

Bluffing is an element that absolutely MUST be incorporated into your poker game, if your wish to be a solid player. Why, you ask? Let’s take two examples to help illuminate the answer to this question.

The Nit: Imagine a player who’s a super-nit and only bets when they have a good hand. In this case, it becomes pretty easy to play against them, for if they show any sign of aggression, you’ll know that you’re likely beat and can make an easy fold. The reason that nits are easy to play against is because they essentially turn their hand face-up when they show any ounce of aggression, allowing their opponents to play near-perfectly against them!

The Maniac: Now, imagine the flipside where you have a player who’s a maniac and shows über amounts of aggression and bluffs too much. Against this player, it’s easy to exploit their tendencies by calling down lighter (with a wider range of value hands) versus them and/or letting them hang themselves by allowing them to be the ones to put more money in the pot when you have a strong hand.

Therefore, as you can see, including the art of bluffing just the right amount into your game is what’ll transcend you into being a very tough player to play against.

To execute a bluff well, timing is the most important key element! Some simple questions to ask yourself in deciding on whether or not a bluff might be effective in a certain spot include the following:

As you can see, there are many considerations you should consider in deciding when might be an opportune time to bluff or not. 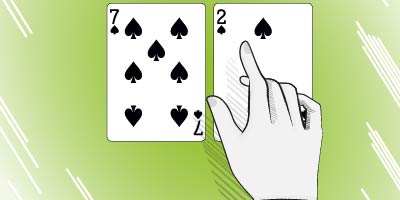 HOW TO BLUFF IN POKER

Bluffing requires you to be an aggressive player, and usually it’s the aggressive players that are winning players. (This is because they can win pots in one of two ways: (1) They have the best hand at showdown, or (2) everyone else folds to their bet or raise and they pick up the pot uncontested.)

That said, it’s not about using blind aggression, but rather that which is carefully selected and used at just the right moment. Here are 9 things you can consider before a hand even begins on whether or not you should even potentially consider bluffing at all (and sometimes at what frequency) if the next hand merits it:

Read the full "How To Bluff in Poker" article >> 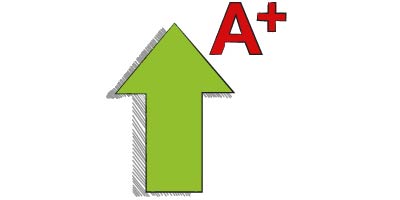 When choosing whether or not to bet, from a simplified standpoint, it should be either to gain value from a worse hand (i.e. value) and/or to deny equity realization from your opponent’s hand and/or make a better hand fold (ie. bluff).

When betting, you must choose sizings and frequencies that take all of the possible hands in your range into account. In doing so you can choose which hands will be the best bluff candidates (something we’ll elaborate upon momentarily) and which ones you can include for value.

There are two primary types of hand ranges of which players usually choose from when constructing their ranges and deciding how much to bet:

In general, polarised ranges will have a much higher bet size than merged ranges. (Perhaps you’ve heard of when someone overbets the river of how he is very polarised, meaning he generally has the nuts or nothing.) With the higher bet sizings, you can generally include more bluffs, as well, relative to the number of value hands that you have in your range. To help illustrate why, let’s look at bluffing from a theoretical, mathematical, and balanced standpoint.

NOTE: This next section refers to bluffs specifically made on the river. This is because once all the community cards are out, equities of hands are fully realised, and you will either have the best hand or not. When bluffing (or semi-bluffing) on the flop and turn, equities often run much closer together, so it’s okay to bluff more during those streets than it is on the river. (We’ll elaborate more on this in “Section 6: The Art of Semi-Bluffing” below.)

By a similar note, as mentioned earlier, you’ll find that betting bigger on the river (meaning you’re often using a more polarized approach), allows you to bluff more often. If you bet $100 into a pot of $50, your opponent is having to call $100 to win $150, meaning he’s getting odds of 3 to 2 (or 1.5 to 1). This means that he has to call and win 40% of the time if he wants to show a profit, which means you should include 60% value hands and 40% bluffs in your range here. 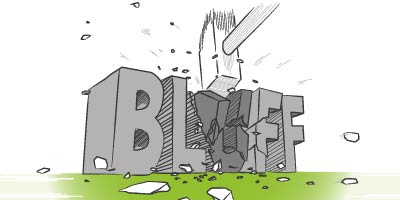 Here are 5 large-scale tips to keep in mind that will help further ensure the success rate of your bluffs: 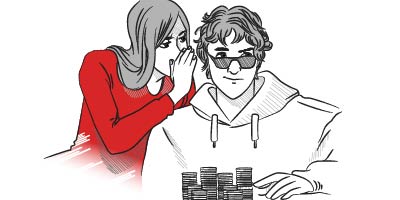 THE ART OF SEMI-BLUFF

Within the grand spectrum of bluffing is a smaller branch of the tree that’s called semi-bluffing, whereby you bet with a hand of (current) low showdown value now (on the flop or the turn) in hopes of improving to a much stronger hand (i.e. straight or flush) on future streets. The power of semi-bluffing comes in the form of (1) having a bigger pot to win, if you do improve on later streets; and (2) allowing your opponent the opportunity to fold a better hand now, subsequently denying him equity realising, and awarding you the current pot in the process.

The 4 Categories of Hands

As a basic concept, there are 4 different categories that you should be able to sort the various hands in your range into for post-flop play:

As an oversimplified system for deciding which hands in your range to bet, in general, you should be betting with those in Categories 1 and 3 and checking with the hands in Categories 2 and 4.

Therefore, semi-bluffing comes into effect by following this system, as we’re going to be betting our draws most of the time, which will ultimately be balanced by our strong value hands.

On the river, it’s easier to determine which hands to consider bluffing with, as at this point in the hand (with no cards to come), all players have realized their equity and can determine the strength of their hand. This is why it’s easier to decide on the river whether a bet is for value or as a bluff (as semi-bluffing is no longer possible).  It’s also the reason why (with our river bet sizing), we can determine exactly the number of bluffs to include in our range.

However, when we’re semi-bluffing on the turn or river, we will almost always still have equity with our draws and as such, it can be difficult to know exactly how often we should be bluffing (semi-bluffing), as well as which hands are best to do it with.

As a very general guideline to follow value-to-bluff ratios for all streets of play should ideally something conform to the likes of this formula:

NOTE: As you know by now, though, that formula for the river will be true if using a pot-sized bet but will vary depending on the bet sizing used.

Which Draws to Bet With

Not all draws are created equal. If you always bet with all of your flush draws and all of your straight draw combos, you will likely be over-bluffing. Therefore, it’s important to carefully select what the best combos are in your range to bet with as a semi-bluff.

In general, the best hands to semi-bluff with on the flop and turn are going to those with very little, if any, showdown value.

Two more instances where it may be advisable to check in situations with draws instead of betting is (1) with combo draws (i.e. straight + flush draws), depending on stack sizes, along with (2) select combos of Ace-high flush draws (again coming back to checking a good portion of the time because of the Ace-high showdown value).

For flush draws specifically, a good rule to follow is this: How would you play your hand if you didn’t have a flush draw with it? As you can see from the QsJs example above, on an Ace-high board, it’s unlikely we’d want to c-bet that flop anyway with just middle pair, so we probably shouldn’t do it either with a flush draw to go along with it.

Read the full "The Art of Semi Bluff" article >> 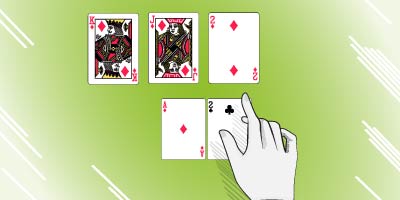 As mentioned previously, it’s going to be easier to know how to play against your opponents when you get a better idea as to the strength of their hand. Noticing any “tells” they may have will increase your hand-reading abilities and can significantly help you in determining if a player is weak or strong.

With that said, here are some common tells to look out for:

Always keep in mind that the above lists are general tells. What may be true for most of the population may not be true for all players.

Furthermore, by really paying attention when you’re at the poker table, you’ll be able to notice other traits and characteristics that various players have that may be indications of strength or weakness.

Read the full "How To Spot a Poker Bluff" article >> 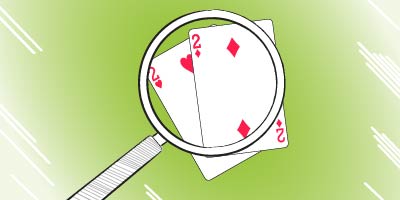 This section refers to the aftermath of a poker hand where one player has bluffed, and the other player called and caught them bluffing. Having reached showdown, there’s always things that you can learn after the hand and adjust for future gameplay. For this, we’ll take a look at both (a) when you catch someone bluffing and (b) when someone else catches your bluff.

When You Call Someone’s Bluff:

When Someone Calls Your Bluff: 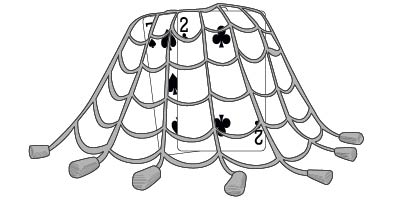 Now that you’ve learnt how to bluff, bluffing strategy, semi-bluffing and how to become a stellar bluff catcher, it’s time to look at some pros in action. The best players in the world will bluff at every opportunity. Why? Well, not only because it showcases their skill level, but also because it is profitable. It makes them money!

Read the full "Best Poker Bluffs of All Times" article >> 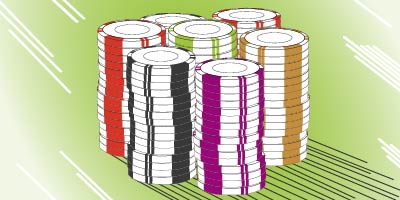 Bluffing is an important facet to any player’s poker game. It can not only help you win more money when executed in a timely fashion, but it can also transform you into an extremely tough player to play against, as your opponents will simply have to guess as to whether you have the goods or an air-ball.

Continue studying the concepts and principles of bluffing well beyond the end of this article. It’s the repetition of these ideas that will really help enforce the key points of bluffing into your brain, which will, in turn, take your gameplay to a whole new level when you’re able to apply it when playing.

Good luck at the felts!